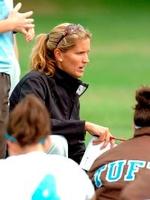 In 2019 under Coach Whiting’s guidance, Tufts advanced to the NCAA “Sweet 16” for the first time since 2005. The Jumbos earned the #1 seed for the NESCAC regular season with a 7–2–1 record and hosted the conference semifinals and final at Kraft Field. With a final ranking of #18 in the nation, Tufts finished with the program’s most wins since 2005 at 14–4–2 overall. Whiting was named NESCAC Coach of the Year, and she with her assistants were honored as United Soccer Coaches Regional Staff of the Year.

The Tufts program has made seven NCAA Tournament appearances overall under Coach Whiting, including the 2000 and 2005 teams that advanced to the NCAA "Final Four." Tufts hosted the "Final Four" on Kraft Field in 2000 and lost to College of New Jersey on a last-second goal in the national championship game. Whiting was named the National Soccer Coaches Association of America Division III National Coach of the Year for that season. That team won a school-record 18 games, which is followed by the 2005 team's 15 wins in the school record book. The Jumbos have an 11-6-4 record overall in NCAA play under Whiting.

Tufts’ 2-0 victory over TCNJ in the second round of the NCAA Tournament last year was the 200th victory of Whiting’s coaching career. Her teams have compiled a 200-108-41 record for a .632 winning percentage. She is the program's all-time victories leader.

The scholar-athletes recruited to Tufts by Coach Whiting and her staff succeed on the field, in class and in the community. Whiting has coached several All-Americans, including teammates Sarah Maloney and Liz Reed from last year's team. Maloney and teammate Sophie Lloyd achieved United Soccer Coaches Scholar All-American status in 2019. Eleven team members received Academic All-NESCAC awards in 2019 for carrying grade point averages of 3.50 or better. The team has an outstanding 3.62 cumulative grade point average.

A 1993 Tufts graduate, Whiting played four seasons as an all-star goalkeeper for the Jumbos. She was the team's MVP three times and still holds the program's records for career saves and fewest goals allowed in a season. After graduation, she worked for six seasons at her alma mater as an assistant coach under Bill Gehling. She was promoted to head coach when Gehling was named Athletic Director at Tufts in July 1999. Whiting also serves as the department’s NCAA compliance coordinator.

Óli Gunnarsson is entering his 5th season as the Jumbo women's soccer team's assistant/goalkeeper coach. The director of the New England Goalkeeper Academy, Gunnarsson has over a decade of goalkeeper coaching experience.

A native of Iceland, Gunnarsson has over 20 years of experience as a goalkeeper for some of Iceland's best professional clubs as well as the country's youth and senior national teams. While in the U.S., he was an All-American all three years of his college career at Flagler College and he was later inducted into the Flagler College Athletic Hall of Fame. He also played as a pro in the American Soccer League.

Coach Gunnarsson is USSF Certified, has the Advanced National Goalkeeper Diploma from United Soccer Coaches and is currently completing his UEFA B License as well as his KSI (Icelandic soccer federation) Goalkeeping License.

Smith will enter her 8th season at the helm for the Cougars in the fall of 2022, leading the program turnaround since coming back to her alma mater in 2014.

After winning just 4 games in her first two seasons the Cougars have combined for 18 wins in the last two seasons and qualified for the NEWMAC Championship Tournament in 2017.  This past fall of 2018, Macy Golman, a member of Smith’s first recruiting class, was named to the United Soccer Coaches All-Region third team.  She becomes the first Clark player to earn this recognition since 2005.

Prior to arrival at Clark, Smith spent four years as the head women's coach at Moravian College in Bethlehem, Pa. where she guided the Greyhounds to four straight Landmark Conference tournament appearances, including a berth in the championship game in 2012. During that 2012 season, Smith was named Landmark Coach of the Year, while two of her student-athletes garnered the league's offensive and defensive player of the year awards, respectively. Her program saw eight student-athletes earn a combined 13 all-conference citations during her tenure, including six first-team selections.

Prior to Moravian, Smith spent nine years as an assistant coach at Tufts University. During her time with the Jumbos, Smith helped lead them to three NCAA Tournament berths, including a trip to the Final Four in 2005 and more than 80 victories.

Smith was a four-year letter winner with the Cougars appearing in 68 of 76 games from 1997-00. She was part of the 1998 team that won a school-record 17 games and garnered the school's lone NCAA Tournament bid. A 2001 Clark University graduate with a degree in psychology and a minor in education, Smith also holds a master's degree in physical education from Bridgewater State and an Advanced National Diploma from the United Soccer Coaches.

Kahan will enter her 2nd year as a full time assistant coach with the Tufts women’s soccer program in the fall of 2022.

Kahan was a four year-year letter winner in soccer at DIII Wesley College. She started all four years for the Wolverines in net and holds one of the lowest goals against average in program history. She was named captain of the team in 2012, her senior year. She graduated with a degree in exercise science in 2014.  Kahan also played semi-professional soccer for the Rhode Island Reds FC in the WPSL for two seasons.

While coaching at Clark, Kahan was also a member of the New England Revolution Academy Staff. She has been on staff for the past 3 years and has held multiple roles within the organization, most recently being the director of coaching for Lincoln Youth Soccer. She is also part of the Rhode Island ODP coaching staff, and NEFC RI.  Additionally, Kahan works as the GK Coach at Division II Assumption College here in Worcester.  Before moving back home to RI, Kahan served as an assistant coach for the Girl’s Varsity Team for Polytech High School in DE for 3 seasons and helped lead the team to a conference championship in 2013. Kahan currently holds her USSF "C" License.